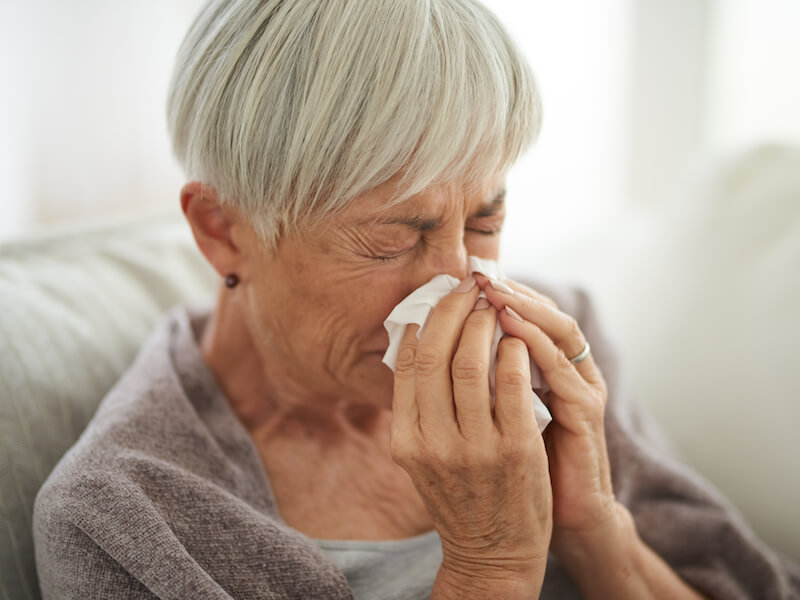 It’s very common to experience cold symptoms. But not every stuffy nose or splitting headache is a result of a rhinovirus. And when you’re battling something other than a common rhinovirus, you might have to speak with your doctor about identifying the correct treatment.

Even if your symptoms appear to be somewhat familiar, you could be dealing with something that’s more than the common cold if you notice some of the following signs.

Normally, a cold will come and go relatively quickly. Your immune system can typically deal with these intruders without much of a problem. As a result, colds usually last somewhere around 3 to 7 days. Some colds that are a bit more stubborn can last for a couple of weeks.

As a result, symptoms that last for more than a couple of weeks, even at lower levels, might be a sign that something else is wrong. In many cases, lingering symptoms could indicate something like a sinus infection (also called sinusitis).

There’s a difference between the typical type of headache you might get from a cold and a sinus headache. Where and how your headache appears is the main difference. When you have a sinus headache, you feel a “full” feeling in your eyes and behind your nose which is usually really painful. When you have a headache from a cold, it will normally affect your overall head and most likely won’t come with any pressure.

So you will probably want to come see us if you’re feeling painful pressure behind your eyes and nose because it’s probably a sinus infection you’re dealing with.

You will get a cold now and then. You’re more likely to catch a cold during a “cold season” like when school starts. But seasonal infections during known cold seasons aren’t the same as “chronic” infections.

You are probably experiencing an allergy if you begin to sneeze right around allergy season or if you are near a known allergy trigger. But you should contact a doctor to make sure it’s not a more serious infection if you are sneezing for more than three weeks consecutively.

Discomfort of the throat when swallowing is a pretty common cold symptom so that in and of itself is not always a sign that you’re experiencing something other than a cold. But a severe, chronic, or periodically sore throat can be an indication that you’re dealing with something more like a sinus infection or another infection like strep. Post nasal drip is normally the source of a sore throat and is a symptom of both a cold and a sinus infection.

When your sinuses and nose fill up with fluid, it has to find somewhere to drain and your throat is the easiest place for it to go. Often, you’ll feel a tickle in your throat. Your throat will then become irritated by the fluid and the coughing it causes. Having a sore throat for a few days is usually nothing to be concerned with but if it hangs around any longer you’re probably dealing with a sinus or other kind of infection.

Sign #5: Your Stuffed up Nose Persists After Your Other Symptoms Are Gone

In some cases, a sinus infection may develop during the course of your cold or respiratory infection. A second infection will begin when fluid gets stuck in your sinuses. So if that dull ache in your sinuses remains, but your sneezing has stopped, this could be a sign that such a secondary infection has taken hold.

Figuring Out Your Symptoms

Identifying the cause of your symptoms after you conclude that they are not being caused by a cold is the next step. It’s fairly likely that you have a sinus infection (sinusitis) and that’s something your doctor can treat. If you have symptoms but you’re pretty certain it’s not a cold, give us a call to get diagnosed.

Call Today to Set Up an Appointment
The site information is for educational and informational purposes only and does not constitute medical advice. To receive personalized advice or treatment, schedule an appointment.

Questions? Talk To Us.